This seems to be the week of “what not to do.” We won’t go into details about how I tried to re-cook a half-boiled egg in the microwave the night before hiking. Let’s just say the exploding egg could have been worse.  Bob didn’t even come into the kitchen when I screamed. I guess he’s used to screams from the kitchen.

But yesterday’s hiking adventure was a bit more attention-getting. For the record, I do NOT do these things because, as a certain spouse suggested, I was envious of all the attention he got when he broke his ribs on a hike in Yunnan last May. Not at all. That hypothermia-inducing six hours down off the mountain after Bob broke his ribs was not something I wanted to re-create.

The hike started beautifully: blue skies, a congenial international group of Australian, Brazilian, Swedish, Austrian, and one American. A great spot up and down and mostly down the mountains. Funny Chinglish signs for entertainment. 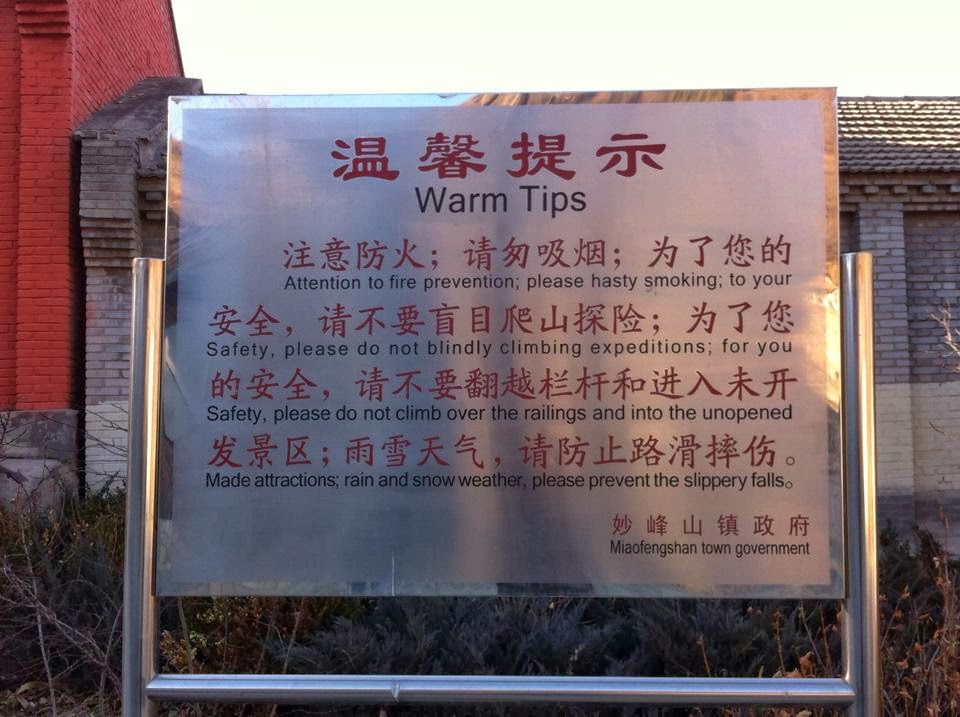 An odd moment where a man at the watch tower on the top of one mountain tried to engage me in his dislike of Japanese (Danger, danger: do not discuss politics when your Chinese is more along the lines of “the weather is nice today” and “I have two children and I’m from America!”).
Beautiful views for a lunchtime break. We came down off the mountain, where we were supposed to go to Da Jue Si, a beautiful old temple, the descent was steep and long and I was very careful to take the downward climb, over boulders and gaps where maybe water once ran, slowly. Finally we came to a more-even path, with just a few rocks, so I picked up the pace.
I tripped over a rock and landed hard on my knees, palms, and forehead. In a brilliant move, my forehead met up with a sharp rock that jutted out of the earth. I yelled something not in Chinese.
Rose, who had been hiking behind me, came up running. I saw from the look on her face and the blood on the ground that it was a bad cut, but with her tissues and Bryony’s gauze and snappy blue wrapping, I was okay for the final 20 minutes off the mountain.

It really became a team effort: Johan trying to be funny to keep me from dozing off in the car on the ride home, Marcio carrying my backpack for me, and Yutta having her driver – and herself – take me to the SOS clinic in Beijing, where I was carefully stitched up by a nice Chinese doctor.
“Yi, er, san,” I heard him counting as he slowly sewed stitches into my forehead. My visions of a hot bath and a glass of wine changed to some ibuprofen and an episode of “Homeland.” His nurse put a tight mesh headband on my head to keep the dressing pressed down, which makes me think I could start a new fashion trend here in Beijing.

Today I woke up to no headache, just some tenderness, and knees that are a whole lot less swollen. And the air is drifting between “hazardous” and “beyond index” so it’s a good day to stay mostly inside.
I’m drinking “Natural Detox” tea from my friend Dawn, who also supplied me with “Tension Tamer,” “Chamomile,” and “Sleepytime.” At first I thought she was sending me a message with her tea gifts, but then I realized she got it exactly right. And that’s the kind of friends I have.

Update:
The next day, I went back to SOS to have my dressing changed and (I suspect) to make sure I'm not going to pull a Miranda Richardson on them.

This time I get a French doctor. After the nurse removes the bandages and the steri-strip, he pronounces the results "perfect."

"And can I drink wine?" I venture.

"Of course," he says with a Gallic shrug. Then he reconsiders. "As long as you bring me a glass too." And this is why I love the French.